me starting a campaign to try and get roger's communications from selling porn--porn that is overtly racist, misogynist, pedophilic, rapist, etc.

in the case of pro-porners and/or pro-sadopatriarchs (pro-"bdsmers") finding this, read: http://community.livejournal.com/_feminism/59030.html, before commenting. chances are, it's already been addressed. let's save each other the hassle.

I'm going to compile an informal listing of radfems under 35 (born post-1970) because academia (or as Mary Daly would say: academentia) thinks or hopes us folk are going the way of the dinosaur.

So if you're a rad fem born 1970 or later, could I get a comment? Just give your username, or a nickname, or your real name. And if you know any authors, singers, activists, etc. who are radfem and under 35, could you give us their name. And maybe a little bio for both categories if you like, or a wee manifesto or whatnot.  And do you/your rad fems you list identify as 2nd or 3rd wave?

This is not meant to belittle older radfems in any wany, shape, or form. They're more than welcome to comment too, but please state you're older than 35, so i don't count you as a "young" rad fem.

The article and the majority of the comments therein express similar feminist outrage that I feel. There is absolutely no point to movies like this other than making money off of the pure hatred of women.

Because of the descriptions of vile acts of misogyny in the movie, I caution everyone with an EXTREME TRIGGER WARNING. Please don't read if you are easily triggered.

Review of Captivity the movie from Pajiba.

If this film depicted the torture of a child or a person of colour as titilation, there would be instant, international outrage (and rightly so) - but because it's a woman, it's treated as not a big deal. In fact it is sold as mainstream, titilating entertainment.

Because women aren't degraded and demeaned enough in real life as it is apparently.

I know, I know, not directly related, but a good concern for women.

"Teal Ribbon- Ovarian Cancer Awareness
Okay, so I was talking with a lady at the local deli in our Price Cutters, and she was frosting something for us, for pink ribbons. October is Breast Cancer Awareness month, and they're goin' all out. Pink cakes, Pink other stuff, so Mom got me something that wasn't frosted yet. As the woman was frosting it, I saw she had a pink ribbon clip to hang her nametag on, but the ribbon was taken out.
We started talking about that, and she said that she was going to put a teal ribbon in instead, for Ovarian cancer.

Here's the thing that wigged me out--
There is no way to detect Ovarian Cancer.
None. Nada.

So, I'm doing my best to start awareness. It HAS to start somewhere, and I'm hoping it'll catch, and there will be something DONE.
There is no detection now, but maybe there can be.

http://www.ocan.org/teal.html
Apparently, September is National Ovarian Cancer Awareness Month.
So, yes, this is a month late, but hey! Maybe next year.

So, whatcha think ladies? Worth a shot?"

Could someone give me a few words on what they feel is feminine? I've been doing extremely informal research on gender studies, and I'd like some opinions, especially on old-fashioned concepts focusing around domestic chores.

I do have fairly strong opinions about these, but I'd like to know what people here have to say first.
Hi, my name is Ana Casian Lakos, and I HATE THE OBJECTIFICATION OF WOMEN, MORE THAN ANYTHING.

That's what i'd like to tell the world. I AM SICK of the way our society condones the objectification, humiliation and degredation of women--especially through pornography, but also in various other ways.


I just needed a place to scream it oud loud, because.. no one else seems to agree with me.

Have a good day.

From the illustrious I'm Not a Feminist, But

The delightful Channel 5 are set to screen a new comedy featuring the oh-so-hilarious lives of women working in a UK brothel. Conspicuously absent from this series will be rape, violence and drug addiction, in their place we have shoe collections, student debt, and a poor, hard done by male whose wife doesn't give him enough attention. Oh, and just to silence any of those whinging feminists who might complain, it's called Respectable - how dare you criticise these women for their choices? It's the oldest profession and it's time we starting giving these ladies some respect. Prude.

Please join me in saying a big fuck you to Channel 5.

And to reinforce it, write to:

(x-posted to my blog)
Okay, I'm searching for sites dealing with the subject of pornography, particularly anti-porn (but either really, since it's good to read up on both "sides"). I'm trying to compile a list on the anti-porn LJ community I moderate, and also for my own and others' reference.

Please share the best you've found! This isn't just for me, either. It will be a good reference for all of us. 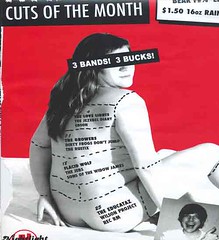 SO, my friend Jason reminded me of this poster that I completely pushed out of my mind (it's so evil). It's advertising a night that they call "Myrene's Cuts of the Month." Here's the rest of the poster:

So if you would like to call/email/send a letter discussing how the poster is sexist/offensive in it's comparison of women to pieces of meat, quite literally, and that you hope that in the future the Nightlight Lounge will not use misogynistic images off women in their advertising campaign (and don't fall for the red herring arguement about how at least it's a "real" woman and not a model. That is not important and is to distract you from the topic at hand: patriarchal portrayals (quite literal in this case) of women as meat.)

The phone number of the Nightlight is (360) 527.1531
The address is 211 E. Chestnut Street, Bellingham, WA 98225
The publicist's email is tamara@nightlightlounge.com and the main email is info@nightlightlounge.com (you could send a copy of your letter to each email account.) And if you want to call I know for a fact that the owner works on Mondays, but could be found at the bar on most evenings.

NO MORE F*ED UP POSTERS! WE'RE HUMAN TOO!

Many many thanks to

vagal_nerve for all your work on the Rumours campaign and also for reinvigorating my belief that I am not alone and that people in my town *do* want to do feminist activism. (of the more unpopular sort) And for all who called. YAY!!

Feel free to X-post at will.
Collapse